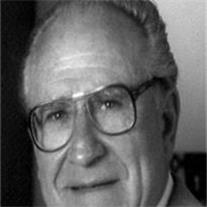 Ivan William Nelson passed away at the age of 88 on Sept. 20th, 2009 in Mesa, Arizona surrounded by his family. Ivan was born to Andrew and Ellen Nelson and raised in Provo, Utah. After serving in the U.S. Navy during World War II, he graduated from BYU. He married his high school sweetheart and love of his life, Gladys Dixon, in 1941 in the Salt Lake Temple. They have been married for 68 years. Together they raised their 6 children and lived in Phoenix, AZ where Ivan worked for Beneficial Life Ins. as a General Agent for AZ. After retiring and moving to Mesa, he returned to insurance with John Hancock Life. Ivan served faithfully with numerous callings in the Church of Jesus Christ of Latter-day Saints. He enjoyed music, sports and was an avid tennis player. His greatest joy was Gladys and his children, 25 grandchildren and 19 great grandchildren. Ivan’s faith in the Lord, his enthusiasm, compassion, generosity and humorous personality endeared him to all. He was preceded in death by his son, David (Claudia). He is survived by his wife, Gladys; sons Bill (Jeanne) and Kent (Kathleen); daughters Diane Garns (Allen), Carolyn Shockey (Jerry) and Julie Morris (Kevin); and by his brothers Lynn and Marvin. Viewing – Thurs., Sept. 24th, 6:00 – 8:00pm @ Bunker’s Garden Chapel, 33 N. Centennial Way, Mesa. Funeral – Fri., Sept. 25th, 10:00am @Three Fountains Ward Bldg., 1852 North Stapley Drive, Mesa with viewing prior at 9:00 – 9:45 am. Interment in Provo City Cemetery, Provo, Utah.