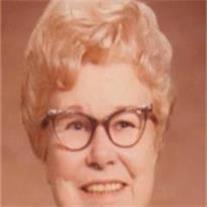 Iris Eleanor Perkins entered into heavenly rest February 20, 2011. She was born July 29, 1916 in Ten Mile, MS. She was predeceased by her husband Andy C. Perkins, son Ronald C. Perkins, parents Jesse and Elisha Purvis and sister Bernice Hicks. Iris was a very good hunter in her early years, with many of her trophies still hanging in the diesel business that she and her husband Andy co-founded in 1947. She continued to work until she was 90 years old. Perkins Diesel survives to this day and is owned and managed by her son Kenny, his wife Mary and two of their sons Jay and Ron. As a civic leader, Iris held office in the Business and Professional Women’s Club from 1960 unto 1985. Other groups that she served were United Methodist Women and Eastern Star. Iris is survived by her son Kenny (Mary), grandsons Andrew (Mirka), Jay (Laura), Ron (fiancé Faith Allen), great-grandchildren Andrew, Hannah, Ryan, and Trey. Her family is especially grateful to her caregiver Betty Fuchs and the devotion shown by her grandsons and great-grandchildren. We wish you a wonderful journey dear mother, grandmother and great-grandmother. As you travel, may this be your best adventure yet! Funeral services are Saturday, Feb. 26, 2011 at 11 AM preceded by a visitation at 10 AM at the 1st United Methodist Church, 15 E. First Ave. Mesa, 85210, officiated by Reverend Jack Troutman. Arrangements by Bunker’s Garden Chapel.