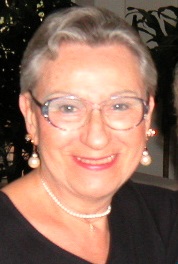 Born June 30, 1927 in Brooklyn, New York, she was the youngest daughter of the late Francis and Zofia (Wilczewski) Milewski. She was their last surviving child of five.

Irene leaves behind her husband of nearly 63 years, Robert (Bob) Gilbert Donohoe, whom she wed on May 17, 1952. She is also survived by her daughter, Dawn Geralyn Marie Donohoe; her son, Mark Francis Donohoe; and one grandchild, Kendra Nicole Donohoe.

Irene, Bob and Dawn moved from Kew Gardens, Queens, New York to Oceanside, Long Island, New York in 1955, where they lived happily for 18 years. Following the course charted by her in-laws, Ann and Howard Grime, who migrated from New York to Arizona, Irene was destined to become a 37-year Phoenix area resident. Her last 15 years were spent living amidst the inspirational mountains of the Ahwatukee Foothills with her beloved family, which very much included Rat Terrier pup Sasha.

Irene was a certified gemologist and worked for over 30 years in the Jewelry Department of Montgomery Ward’s until the chain closed its doors in 2000. She absolutely embraced life to the fullest … and so loved her work and church, politics, Frank Sinatra, smiley faces, and being a wife and mother. She also loved to cook – fried chicken, chicken soup, Polish golumpki, and spaghetti, sausages and meatballs in her spectacular homemade marinara sauce being the top specialties of the house. She was into vitamin supplements and health foods, super veggies, and all of the “keep your mind, body and spirit fit” workouts decades before any of them went mainstream. Irene was a devoted Roman Catholic, deriving tremendous strength from her unwavering faith her entire life.

Private services were held at Bunker’s Garden Chapel in Mesa, Arizona. In lieu of flowers, memorial contributions may be made in her name to the Alzheimer’s Foundation of America at 322 Eighth Avenue, 7th Floor, New York, NY 10001 or 1.866.232.8484.