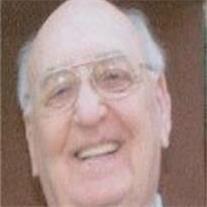 Howard Gerold Koglmeier (Jerry), loving husband and father, peacefully passed into heavenly Fathers arms on June 4, 2013. He was born on March 23, 1928 in Mobridge, South Dakota to George and Selma Koglmeier. Jerry met and married the love of his life, Gloria Jean Raifsnyder, on April 15, 1950, while he was serving in the Army’s 82nd Airborne Division as a paratrooper at Fort Bragg, North Carolina. He and Gloria were married for 63 years and together had three children.

Jerry owned and operated a water treatment business prior to his retirement in 1982. He and his wife then traveled extensively and he later served for many years as a prison chaplain in Walla Walla, Washington. Jerry was a man of great strength, faith and conviction in service to God and man.

Jerry will be lovingly remembered by his family and all who knew him for his wonderful sense of humor and ability to enjoy life, even in the face of life’s challenges. Even in his later years of declining health and up until the time of his passing, his sense of humor was keen and sharp. He had the uncanny ability to make the difficult times easier with his jokes and ability to see the bright side of any situation.

Jerry will be missed and loved by his family and friends but we know he is well and is in the hands of The Lord.

Services will be held to celebrate Jerry’s life at Bunker’s Mortuary at 33 N Centennial Way Mesa, AZ 85201 on June 10, 2013 at 10:00 am, with visitation one hour prior to the services . Interment will follow at Mariposa Gardens Memorial Park located at 6747 E. Broadway Road, Mesa, Arizona.