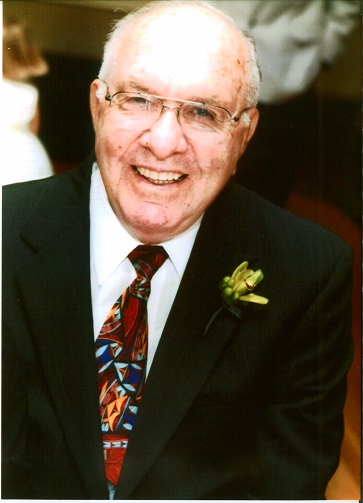 Herbert Curtis Ashcroft started his last, great adventure on June 23, 2019. He was 90 years old- born October 22, 1928 in Ramah, New Mexico.  He and his wife Janet L. (Monroe) Ashcroft had lived in Mesa, Arizona for twenty years.  They celebrated their 50th wedding anniversary in November of 2017.

Herbert led a very long and interesting life.  He enlisted in the U.S. Air Force in 1946, and was both a cryptographer as well as a navigator.  He flew many VIPs, including Elvis Presley and then Vice President Richard Nixon. His travels took him around the world several times, but his proudest moment was picking up Gemini 8 astronauts Neil Armstrong and David Scott in Okinawa after they had completed their successful lunar mission.  He retired from the Air Force an officer, ranking as a Major.

Herbert was father to Bruce Alan, Susan Elanor, Michael Curtis, and Sharon Elisabeth, whom he had with his first wife, Elisabeth Elanor (Wake) Ashcroft. She preceded him in death, as did his eldest son, Bruce Alan.  Herbert is survived by three living children, eight grandchildren, and six great grandchildren.

After retiring from the Air Force, Herb sold real estate in New Mexico, and eventually went into the restaurant business, supervising operations for Golden Corral’s national chain as Vice President.

Herb was an avid reader, enjoying a variety of books.  He loved traveling by trailer with his trusty navigator, Janet, across forty eight states and into Canada. They also flew to Europe and Australia. Whether it was panning for gold in Alaska, cooking lobsters right out of the water in Boston, or picking up sea shells on the beach in Coronado, California, he relished every moment spent on the road.

Herb also loved horses.  His brother, Jim Ashcroft, was a professional jockey, and from the age of nine Herbert would travel with Jim to race tracks across the country.  As an adult, he raised both quarter horse and thoroughbred race horses, and delighted in sharing the winner’s circle many times with family and friends.  After retiring from the restaurant business, he purchased a small ranch in Los Lunas, New Mexico, where he lived many years, raising brood mares and colts.  He eventually said goodbye to country life, and moved to Mesa.

He and Janet worked at the Church of Jesus Christ of Latter Day Saints Mesa temple, and he was recognized by the Church for his work in indexing over a million names for genealogy purposes. He felt that one of the greatest blessings in his life was time spent in service while a member of the Church.

In lieu of flowers, the family has asked that donations be sent to Hospice of the Valley- Team J at 1510 East Flower Street Phoenix, Arizona  85014.  Herbert’s family expresses their deepest gratitude for the compassionate comfort and care Team J provided during his final week at home.

Funeral services will be held July 2, 2019 at the Church of Jesus Christ of Latter Day Saints at 5620 East Adobe Street in Mesa, Arizona.  Visitation will start at 9 a.m., followed by a church service at 10 a.m.  Herbert Curtis Ashcroft will be interred following the service at National Memorial Cemetery of Arizona at 23029 Cave Creek Road in Phoenix, Arizona.