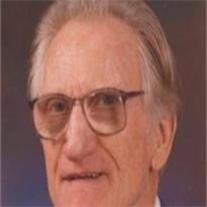 Henry G. DeVeau of Mesa, AZ passed away May 7, 2010 at home. Henry is survived by his wife June, 5 children, 3 step-children, 33 grandchildren and more than 40 great-grandchildren. He was a member of the LDS Church. Henry served his country in the Air Force as a pilot from 1943-1946. He was a co-founder of the Phoenix Flyers. He was previously employed by Berge Ford and later owned an Exxon station at McKellips and Mesa Drive. Funeral services are Wed., May 12, 2010 at 9 AM preceded by a visitation at 8 AM at the LDS Three Fountains Ward, 1852 N. Stapley Dr. in Mesa. In lieu of flowers donations may be made to the HDSA (Huntington’s Society). Arrangements by Bunker’s Garden Chapel.