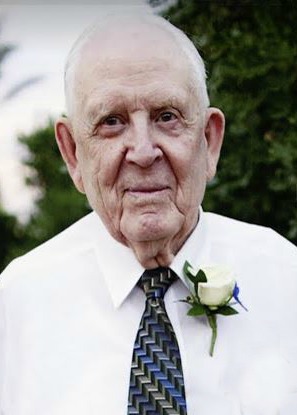 Henry Alden (Al) Whetten, Jr. graduated from this life on 25 February 2017 in Mesa, Arizona at the age of 94. He was born to Henry Alden Whetten, Sr. and Lillie Mae Beecroft on 2 November 1922 in Colonia Dublan, Chihuahua, Mexico.

Al had a true “Wild West” experience in his early childhood in Mexico. His family moved to the Phoenix/Mesa area in 1936 when Al was fourteen. He was an industrious youth and could be found delivering newspapers, selling ice cream from his bicycle in Mesa and later, milking his own herd of cows in South Chandler before and after attending Mesa High School every day.

Al joined the Armed Forces during World War II and served as an MP in England.  After the war he returned to Mesa and met and married Elda Hansen in the Mesa LDS Temple on 1 August 1947. They lived in Mesa where Al worked as a dairy farmer. In 1950 they moved to Idaho to try dairy farming there but returned to Mesa in 1956.  At this time Al decided to try his hand at building houses and found his true niche in life.  He became a contractor/developer and ran Your Home Construction for many years.

After losing Elda to cancer in 1972, Al married Lenore Hatch in 1979.  They had a wonderful companionship, enjoying their later years with travelling to Church History sites, square dancing and serving as the best Grandparents in the world.