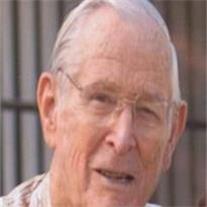 Helaman Pratt Cardon, beloved by family, friends, and everyone who knew him passed away on Thursday, September 22, 2011 after 95 years of service. He was a supremely honorable man, with a wonderful sense of humor who delighted in children, in music, but most of all in his cherished wife of 71 years, Virginia Lucille.

Born on the banks of the Rillito River, one of nine children of Louis Paul and Mary Irene Cardon, Helaman went on to receive a degree in Mechanical Engineering from the University of Arizona. He served the entire duration of WWII as a Tank Commander of the 3rd Armored Division, and retired as a Major having received The Bronze Star Medal, Silver Star Medal, Purple Heart, and European Theater Medal among other honors. After a successful career in the automotive industry and the ownership of a sheet metal business in Royal Oak, Michigan, Helaman served as an Elder, Bishop, and Temple Counselor in the LDS Church as well as missionary along with Virginia on the Duck Valley Indian Reservation. He was preceded in death by his parents and 5 brothers, Parley, Wilford, Stanley, Bartley, Orson and 1 sister Dora. He is survived by his wife, Virginia, his sisters Edna Trejo and Amy O’Dell, his daughter, Amy (Jerry) Nickles, his son, David (Pam) Cardon, his grandchildren, Heather (Matt) Bills, Heidi (Charles) Hillman, Melissa (Maggie) Nickles, Jeffrey Nickles and five great-grandchildren, Andrew, Sophia, Tyler, Ava, and Elin. Funeral services will be held on Friday, September 30 at the Grandview 1st Ward Building, 1455 N. Harris, Mesa; the viewing will begin at 10AM and services at 11 AM. Military rites will be held at the Mesa Cemetery immediately following the service. Flowers can be sent to Bunker’s Garden Chapel, 33 N. Centennial Way, Mesa, or contributions to the LDS Humanitarian Fund.