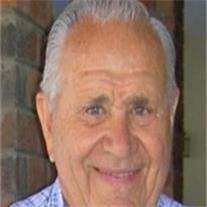 Heber J Clement passed away at his home, while surrounded by his family, on January 3, 2012 after a courageous four year battle with cancer. He was born on March 9, 1933 in Mesa, Arizona as the 10th child of Lester and Maude Clement. He graduated from Mesa High School in 1952 and then worked for the Mountain Bell Telephone Company for 35 years. He was drafted in 1953 during the Korean War and stationed in Alaska for two years. Heber was an active, lifelong member of the Church of Jesus Christ of Latter-day Saints. He is survived by his wife, Coleen of 58 years and his children: Michael (Julie), Diana (Karl) Hiatt, Keith, Ronald (Lindalee) and Kathryn (Eugene) Prince. Heber was the proud grandfather of 22 grandchildren and 10 great-grandchildren. He is survived by sisters Alta Willis, Pearl Nichols, Dora Holbrook, Nione (Roger) Larson and his brothers Lee (Vona), and Donald (Joan) Clement. Visitation will be Friday Jan 6, from 7-9 PM at Bunker’s Garden Chapel, 33 Centennial Way, Mesa, AZ 85201. His funeral service will be held Saturday Jan. 7th at 3 PM at the LDS chapel, 611 N. Stewart, Mesa, AZ. 85201. Visitation will precede the funeral from 2:00 to 2:45 PM.