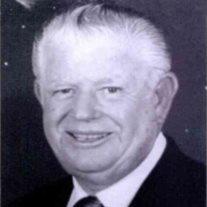 Harry James Rodgers, 83, passed away peacefully at his home in Mesa, Arizona on August 1, 2014 after an 18 month battle with Leukemia. With him, at his bedside, were his beautiful wife of 52 years, Marge Rodgers and other family members. Harry leaves behind 2 children, 7 grandchildren, and 12 great grandkids.
Harry and Marge have been active members of the Fountain of the Sun retirement community in Mesa, since moving from Simi Valley, California 28 years ago. They organized and personally lead numerous wonderful trips around the world for their friends and neighbors in FOS. They were also known for their Christmas Parties.
While raising their kids Harry and Marge were avid campers, boaters and off-road motorcycle riders. After the kids grew, they gave up two wheels for off-road dune buggies, then spent years traveling in their motorhomes seeing the country.
Harry was born on December 25, 1930 in Bell, California. He was the youngest of 7 children. Served in the Navy for 5 years and saw active duty during the Korean War as an aerial photographer.
After the Navy Harry became a Teamster line truck driver for AM Lewis Certified Grocers in San Diego, then Northridge California, where he worked for 37 years before retiring and moving to Mesa, Arizona. He lived a full life, with a very outgoing personality that could put a smile on anyone’s face.
A Memorial Service will be held Saturday, Aug 9th, at 11:00 am, at the Church of Jesus Christ of Latter-day Saints, 1007 S. 72nd St, Mesa, AZ 85208.