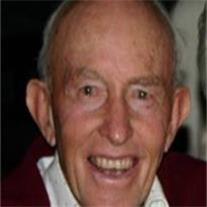 Harold Palmer Mosley passed away on Thursday, January 5, 2012. He was the son of Palmer Duncan and Faye Almeda Helquist Mosley. He was born on May 20, 1923, in Blanding, Utah, and grew up in Phoenix. He attended Phoenix College and was drafted into the US Army, earning the rank of Tech 4. He helped build an airstrip for the B-19 bombers in India and worked at another airstrip in Burma. After the war, he worked as a mechanic in Blanding. He married Joan Hurst and they had six children. On Sept. 19, 1987, he married Willa Jean Lechner. They spent their winters in Phoenix and their summers in Aztec, New Mexico.

Harold was a hard worker and was employed in many different jobs including uranium mining, logging, plumbing and a variety of mechanic work. He was an active member of The Church of Jesus Christ of Latter-day Saints. A funeral service will be held at 11:00a.m. on Saturday, Jan. 14, 2012, at the chapel located on 4343 E. Waltann in Phoenix, AZ. Harold is survived by his wife, Willa, his sister, Irene Kurtz, and his brother, Benton (and Margie) Mosley. He is also survived by his children; Wade (and Sue) Mosley, Susan (Mrs. Samuel) Robinson, Kirk (and Karen) Mosley, Stephen (and Charlotte) Mosley, Denise (Mrs. Drew) Daniels, and Karen (Mrs. David) Wilson. Harold has 25 grandchildren and over 35 great-grandchildren. In lieu of flowers, please consider a donation to Hospice of the Valley.