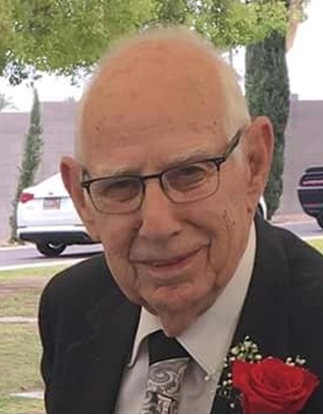 WEHRLI – Hans Rudolph (Rudy) Wehrli, 97, a resident of Gilbert AZ since 1996, died Wednesday, November 17th, 1921.  Rudy was born in Manhattan, NY on December 4, 1923, son of Gotthold Wehrli and Hedwig Marie Stocker.  Rudy turned 18 just 3 days before Pearl Harbor, so was immediately in line with many other patriots to volunteer for Military Service the morning of December 8th. He served in the Army Air Corp during World War 2.  Rudy met his bride Norma Griffiths while stationed at Hill Field Air Force Base in Utah.

After leaving the service, he studied at the New York Culinary Arts School and was a pastry chef with his dad in New York. They loved the west, so moved to Idaho before joining The Fuller Brush Company. Rudy rose through the ranks from a part time Fullerette to Executive Vice President of Sale at the home office in Hartford, CN. After retirement, Rudy joined TTI, then started his own company RT Industrial Video in Burbank, CA.

As evidenced by his daily enthusiasm, Rudy was a member of the Optimist Club, and known for his Zip-a-Dee-Doo-Dah signature song. Always willing to smile and laugh at himself, he was known for his “no problem” philosophy of life.  He was a prolific poet and wrote his own autobiography. Rudy was an active member of the Church of Jesus Christ of Latter-day Saints and served in many leadership positions including Bishop of the Woodland Hills CA Ward and Patriarch in the San Fernando, CA stake and Gilbert AZ stake for over 30 years. Rudy and Norma served two missions in the Swiss Temple where Rudy was in the Temple presidency.

Rudy and Norma loved adventure and started out their fun with the Harper Street Snackers who would boat at Lake Powell, then went on to travel the globe.  They loved to Cruise, but especially loved returning to Rudy’s family roots in Switzerland.