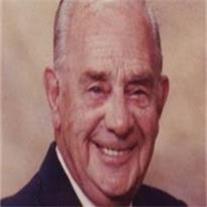 Gus Kambouris passed away peacefully early Sunday morning January 13, 2013, with his daughter by his side. He was born in Scranton, Pennsylvania, August 4, 1924 to Efstratios Kambouris and Mary K DeVine. He married Jean Tillman on April 1, 1950 in Las Vegas, NV. Gus was an extremely accomplished man having served as a tail gunner in the Army Air Corps in the European Theater during WWII. He worked for the Department of Defense for Twenty-nine years. During this time he served two tours overseas including Trois Fontaines Ammunition Depot in France and Camp Zama Japan. The rest of his Civil Service was spent at Navajo Army Depot in Flagstaff and at Fort Huachuca. After “retiring