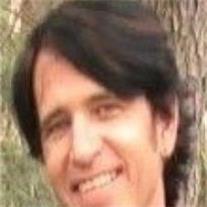 Gregory Winfield Gibbs, November 9, 1968 – August 26, 2010. A bright light has dimmed and a sparkling star has emerged somewhere in the western sky. During the summer evening of August 26th, Greg Gibbs unexpectedly died in his Tempe, Arizona home. His passing leaves an enormous void in the lives of his family and friends; however, a collection of extraordinary memories remain. Gregory Winfield Gibbs was born in Laconia, New Hampshire, on November 9, 1968, following a late fall blizzard. He was the second child and son of Marcia (Guild) and Richard Gibbs. The traits that defined Greg were forged early: creativity, charm, generosity, love of music, sharp wit, tenderness, athleticism, and a defense of the different. He was an incredible talent. Greg collected toys, antiques, memorabilia—anything that “spoke