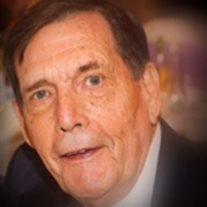 He was married to the “wonder of his life” Marj on December 26, 1960 in La Jolla, California. They raised their family in Burbank, California, and moved to Arizona in 2002. He was a graduate in business from the University of Utah. He is a veteran of the Army and served in Germany during the Korean War. Gordon worked as a computer systems auditor and retired early to devote time to his children and grandchildren and to serving others. He dedicated his life to God, the Savior, his Family and his Country.

He is survived by his wife and four children, Todd, Tom, David and Julie, their spouses, 12 grandchildren and two great-grandchildren. Gordon is reunited with his loved ones preceding him in death, including his son, James Donald Udall, parents, and siblings, Dorothy, Lawrence, and Theodore.

Gordon was a life-long member of The Church of Jesus Christ of Latter-day Saints, a devout Mormon with a great love of his Savior Jesus Christ. He served in many areas within the LDS Church including the nursery, the Young Men’s organization, and as a Bishop. As a senior missionary couple, he and Marj served in the Oklahoma, Oklahoma City Mission. He also served in the Los Angeles Temple, and in the Mesa Arizona Temple.