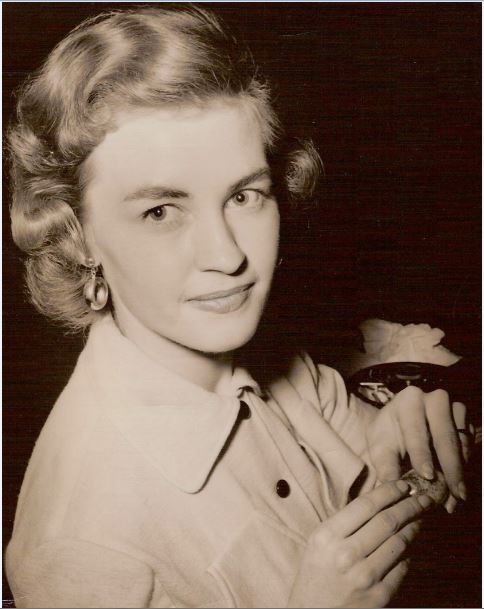 In death she was reunited with her husband Charles L. “Bud” Gleave, whose passing preceded hers by five months. It was their longest separation in 63 years of marriage.

Gloria Halverson was born January 5, 1927 in Gunnison, Utah, the third of six children of Harold Clinton Halverson and Margaret Johanna Louisa Johnson. Her family was rooted in the tide of immigration that came from Scandinavia to Central Utah at the end of the nineteenth century, and she always cherished memories of the distinctive culture and intimacy of her small town upbringing. As a teenager she moved with her family to Salt Lake City, where she graduated from East High School and Stevens-Henager Business College, then worked for the IRS during World War II.

After the war, she travelled and job-hopped in cities across America from Denver to Miami to Havana. Back in Salt Lake, following a blind date and an ensuing romance, Gloria married former East High classmate Bud Gleave. In 1960, Bud and Gloria moved their young family to Arizona, where they remained as long-time residents of Scottsdale, Paradise Valley and Mesa. She worked for many years as a secretary for the Salt River Project. Among many interests, she had a lifelong passion for visual art, devoting countless hours to her study of watercolor and oil painting. For Gloria there could not be too much chocolate, too many vitamins or too many art books. We will miss her generosity and unswayable love for her family.

Gloria is survived by sons Joseph (Janet), Robert (Stacey) and Kelly (Karen), 11 grandchildren, and by her sister Hallie Halverson and brother Jay Halverson. She was preceded in death by her husband, and by brothers Claire and Jimmy, as well as a sister JoAnn who died in infancy. Our sincere gratitude to the doctors and staff of the Huntsman Cancer Hospital in Salt Lake City, and the Scottsdale Mayo Clinic, who kept Gloria’s illness at bay until age could take her gracefully home.