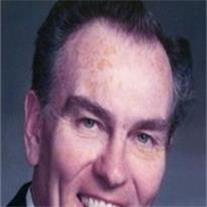 Glenn Arnold Wardrop returned to his Heavenly Father on May 13, 2012 at the age of 82 after a full and inspiring life. Born January 1, 1930 in Salt Lake City, Utah, Glenn was the youngest child of Leo C. Wardrop and Roseanna Zumbrennen. He learned early the principle of hard work as he was tutored alongside his parents. As a young man, he served a mission to Great Britain after which he married the love of his life, Pauline Gale in 1953 in the Salt Lake City LDS Temple. He earned his degree in Business Marketing from Brigham Young University and went on to spend 38 years as a Finance Director for U.S. West Communications. Glenn and Pauline moved extensively throughout their marriage, living in Utah, Georgia, Idaho, Colorado, New Jersey, Wyoming and Arizona. Having a resolute testimony of the restored gospel, he served with vigor in many callings in the Church of Jesus Christ of Latter-day Saints including bishop, stake president and as president of the Oklahoma Tulsa Mission. In the community, he served on the executive board of the Long’s Peak Council of the Boy Scouts of America, as president of the Optimist Club in Cheyenne, Wyoming and as an admissions advisor for Brigham Young University, Ricks College, and the University of Wyoming. Interested in construction, he completed his first building project as a young man with his father. As a side adventure, he went on to construct condominiums, apartments and homes. His strong work ethic led him to give 100% to every project he undertook. Of all his accomplishments, Glenn’s greatest achievement is that of having a strong, loving, unified family. He taught his children that the love and unity of a family is life’s greatest blessing. His last days were spent expressing gratitude for the love and blessings of his dear family. Glenn is survived by his wife Pauline, his children Kari, Brad (Celeste), Lon (Sheryl) and Dan (Tami); his brother Calvin (Dorthy–deceased); his 13 grandchildren and 6 great-grandchildren. He is preceded in death by his parents and sisters, Margaret (Whitney) Chapman and Leone (Carlisle) MacKay. Funeral services for Glenn will be held at 11:00 a.m. Thursday, May 17th at the LDS Chapel at 1483 N. Driftwood Drive, Gilbert, Arizona with viewings from 9:30–10:30 a.m. that day at the church and 6:00-8:00 p.m. the previous evening (Wednesday, the 16th), also at the church. A graveside service will be held at 11:00 a.m. on Saturday, May 19th at Wasatch Lawn Memorial Park 3401 S. Highland Drive, Salt Lake City, Utah.