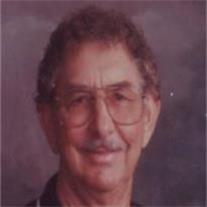 Glenn Alden Jones, a longtime Arizona resident, went to be with our Lord on January 7, 2013 with his loving wife and son at his side. Glenn was born in Chelsea, Oklahoma on April 4, 1936. Glenn is survived by his wife Ann, son G. Travis Jones, daughters Anita Cooper and Glenda Phillips, stepchildren Frances Wayland and William Newman, sister Helen Barnes and brothers Ray, Everett and Jessie Don Jones. He also has 10 grandchildren, 4 great-grandchildren and many nieces and nephews, all of whom he loved dearly. He is predeceased by his daughter Jennifer, his sister Zadie Tidwell and his parents Clifford and Pearl Jones. Glenn was a Renaissance man. He held many interesting and diverse jobs including the US Army, mining, roofing, construction and Corrections. He retired from the City of Phoenix in 1996 where he had been the Supervisor of the Low Income Weatherization program for many years until it was outsourced and he finished his career as Building Maintenance Supervisor in charge of Terminal 3 and the General Aviation spaces. Glenn loved his Lord, his family, traveling, acting, golfing, the Cardinals, fishing and “tinkering