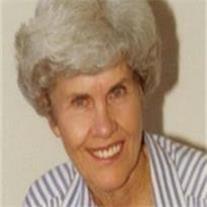 Glenda Maude Stradling Lloyd, born May 29, 1921, passed away on April 11, 2013 in Mesa. A native of Arizona, she was born in St. Johns, the daughter of Joseph O. and Harriet J. Stradling. She married Dr. David O. Lloyd, a veteran of WW II, on September 18, 1946. They are the parents of seven children: John Arthur, Dennis, Linden, Janet Lisonbee, Bonnie Roberts, and Julie, deceased. They have 38 grandchildren and 79 great grandchildren.

Glenda resided in Arizona much of her life. She attended Mesa Public Schools and Brigham Young University. Always active in the Church of Jesus Christ of Latter-day Saints, she served as an auxiliary teacher, librarian; and missionary for the church in Independence, Missouri. Later, with her husband, she served as a tour guide in the Missouri, Independence Visitors Center.

She supported David in his many civic responsibilities during his professional years, and was the mother, homemaker, and family gardener as they reared their children. Upon his retirement, as Assistant Superinten-dent of Mesa Public Schools, she accompanied him in his quest to see the world. Throughout her life, she maintained a keen interest in current events because of having seen most of the countries mentioned in the news coverage. Glenda’s political views were frequently sought by others because she conscientiously evaluated candidates and issues according to Constitutional principles of government.