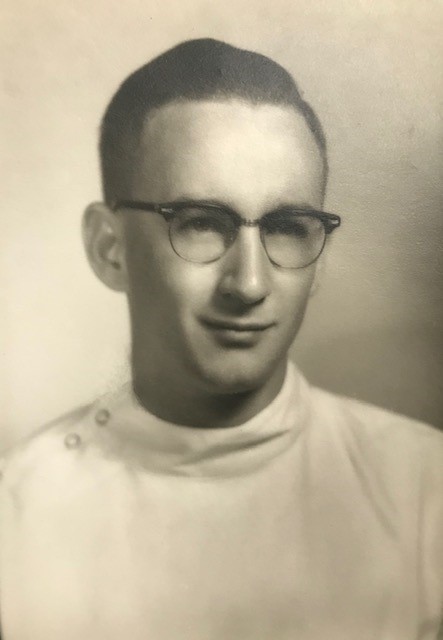 Glen Charles Griffin, 85, passed away peacefully on July 31, 2020 in Mesa, Arizona. He was born to Benjamin and Marian Griffin in Asnieres, France on August 2, 1934. He grew up with two loving sisters: Janet Chamberlain (Wayne) and Lois Jensen (Alan). While doing his preceptorship as a young doctor-to-be in Liberty, Texas he met a delightful nurse, Mary Ella Page. They married in 1957 and raised 6 children: Janelle Selover (Robert), Joan Watson, Mark Griffin, Gary Griffin, Jill Shook, and Greg Griffin (Carl Kamb). He graduated from the University of Texas as a Doctor of Medicine. As a Captain in the Army he served at Martin Army Hospital, Fort Benning, Georgia before setting up a private pediatric practice in Columbus, Georgia. During this time he served as the bishop of the Columbus 2nd Ward in the Atlanta Stake. Glen moved the family to Bountiful, Utah where he set up a one-of-a-kind drive-in medical office. Patients could park and come in to their own exam room, set up like a living room, without going into a waiting room. It was his privilege to serve the wonderful families in the Bountiful area. Glen was appointed as a Consultant for Health Services for the Church of Jesus Christ of Latter-day Saints and would sit at the side of the stand to provide medical coverage at General Conference. After retiring from his pediatrics practice Glen became the Editor-in-Chief at Postgraduate Medicine. He was an author and published many books including You Were Smaller than a Dot. He co-authored with Dr. Bill Castelli, Good Fat, Bad Fat: How to Lower Your Cholesterol & Beat the Odds of a Heart Attack. Later he served as Editor-in-Chief of the Journal of Collegium Aesculapium, the medical journal for doctors in the Church. He also wrote a syndicated column called Child Care that appeared in many newspapers nationwide. Glen was the founder of the CAMIE AWARDS, to encourage production and awareness of outstanding, uplifting and entertaining motion pictures with positive role models. CAMIE is the acronym for Character And Morality In Entertainment. Glen and Mary Ella served a medical mission for The Church of Jesus Christ of Latter-day Saints in Asia based in the Singapore Mission from April 2001 – September 2002. Together they traveled and served in Cambodia, Hong Kong, India, Indonesia, Malaysia, Mongolia, Singapore and Thailand. One of the highlights of their mission was teaching the gospel to their miracle girl from China, Xialian, and others. Glen loved doctoring his patients, writing, inventing, designing and building homes, watching CAMIE approved movies, and BYU football. Most of all he loved his family. He is preceded in death by his parents, Ben and Marian and his loving wife, Mary Ella. Their legacy will be continued through their 6 children and their 16 grandchildren: Jeff, Holly, Heidi, Audrey, Jason, Ty, Michael, Spencer, Brian, Emily, Kelsey, Heather, TJ, Rainey, Kaelin and Riane, and 21 great grandchildren: Marley, Hendrix, Rory, Jacob, Carter, Olivia, Derek, Grant, Maddie, Lacey, Blake, Leah, Ben, Ella, Claire, Logan, Calvin, Beckham, Russell, Mila, and Dakota. Funeral services are Thursday, August 6, 2020 at 4:00 p.m., preceded by a visitation from 3:30 p.m., with the family prayer at 3:45 at the Bunker’s University Chapel, 3529 East University Drive, Mesa, Arizona 85213. (Due to COVID-19 restrictions service is limited to family only. Please request an invite to the Facebook Group called Grandad Griffin’s Live Funeral and you will be added where a live Facebook funeral stream will begin at 3:30 p.m. on Thursday. After the live stream concludes a link will then be available in the group to watch at a later time.) Interment will be Friday, August 7, 2020 at 1:00 p.m. at National Memorial Cemetery of Arizona, 23029 North Cave Creek Road, Phoenix, Arizona 85024. (Due to COVID-19 restrictions burial is by invitation only.) The family wishes to thank the wonderful staff, caregivers, med techs, chaplains, nurses and doctors at Emerald Groves Central, ATLAS Medical and THEMA Hospice for taking such loving care of our Dad, Dr. Glen. Bunker’s University Chapel handled the arrangements.