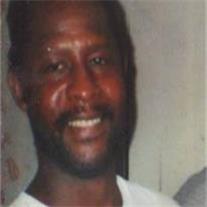 Gerry McClelland, eighth and youngest child of Noble and Jaunita McClelland, passed away August 21, 2012 in Mesa, Arizona. Gerry’s education started at Irving Elementary and Carson Jr. High. He graduated from Westwood High in 1979. He was an A star, as he would say. We all knew he was good. He played football and basketball during his years at Westwood High. He loved those Cowboys! Gerry worked three years for Standard Brand Paint Company, in Mesa and four years in Phoenix. Gerry retired in 1993. He also worked part-time with his uncle Bill. Preceding him in death are, his father Noble and his mother Jaunita McClelland. He leaves to cherish his memory six brothers and one sister. Charles Zell (Callie) of Phoenix, AZ, Jessie James of Mesa, AZ, Jim (Joan) of Phoenix, AZ, John L. of Mesa, AZ, Princess Ann Thomas of Tempe, AZ. He also leaves numerous nephews, nieces, aunts, uncles, cousins and friends who will miss him dearly. Visitation will be Thursday, August 30, 2012 from 6-8 PM at Bunker’s Garden Chapel, 33 N. Centennial Way in Mesa. Funeral services are Friday, August 31, 2012 at 11 AM at the Shiloh Baptist Church, 56 South Robson in Mesa, followed by interment in the City of Mesa Cemetery.