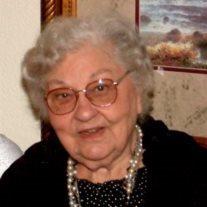 Geraldine West Peterson was born on July 20, 1916 in Lakeside, AZ. After a full and blessed life at the age of 97, she passed peacefully in her sleep the morning of March 2, 2014.
Geraldine raised 4 children who gave her 18 adoring grandchildren and 49 great-grandchildren. She is survived by her loving daughter, Deanna (Gary) McCleve, and devoted son Joe (Linda) Peterson. She has now joined her other two children, Don (Penny) Peterson and Erna (Robert) Tanner beyond the veil. Geraldine lived a life devoted to her family. Her parents were Karl B. West and Irma Hansen West. Her dear brothers and sisters were Urna, (deceased as infant), Roxie (Orr) Owens (deceased), Mildred Schurig Wiseman Packer, Karl Keith (Barbara) West (deceased), Wanda (Melvin) Palmer, and Corwin (Jonnamay) West (deceased). They grew up together in Lakeside, Arizona embraced by extended family and friends.
Geraldine fell in love with Don W. Peterson in Lakeside, and attended college in Tempe, Arizona. Her love for the gospel and desire to serve the Lord compelled her to serve a mission. Upon her return home, Don and Geraldine were married on Dec. 14, 1937, in the Mesa, Az. Temple. Their honeymoon was spent in the Adams hotel in Phoenix. Later, with four children, Geraldine told her husband, “I served a mission – now it’s your turn!” She gladly moved in with her parents in Lehi, AZ to care for her family while he served the Lord in Washington State.
Geraldine was a hard-working woman. She once explained, “Some people look at a challenge and back away, but when women in our family meet a challenge, we salivate at the opportunity to conquer that task.” Geraldine proved her philosophy as she spent many years working for Cardon Oil Company and Smith-Heywood Freight Lines as a book keeper. She also worked with her husband running dairy cows, managing the Palace Motel in Show Low, Arizona, building pool tables, managing irrigation services, owning and managing a trailer park, and with her son, Joe, built a home and duplex to rent.
Geraldine was an extremely creative person. She was talented at the piano and loved playing the pieces Rustles of Spring, Hall of the Mountain King, Prelude in C, Prelude in C Minor, among many others. She served as ward organist many times throughout her life. However, her artistic endeavors did not end with music; She was also a capable painter and accomplished seamstress. Many of her beautiful landscape scenes hung on the walls of her home and her beautiful dresses were delightfully worn by her sisters in her younger days and later, her daughters and granddaughters. She also designed and sewed all of her clothes and used the extra fabric to make beautiful quilts which she gave as treasured wedding gifts.
After her Father’s death, Geraldine cared for her Mother Irma Hansen West until she passed away December 19, 1993 at the age of 97. Until her passing, Geraldine was the oldest living member of the Hansen and West family and we miss her already. It is comforting to know that she is basking in her reunion with her beloved Don, cherished children, Erna and Donny, her dear parents, treasured little sister, Urna, her sister Roxie and brothers Karl and Corwin and other dear friends family members. And we know she is smacking her lips and the next challenge as she sets to work for her family from beyond the veil. Funeral services are Saturday, March 8, 2014 at 9:30 AM, preceded by a visitation at 8:30 AM at the LDS Cooley Park Ward, 3920 East Brown Road, Mesa, 85205. Interment will be at 4 PM at the Lakeside Cemetery, Lakeside, Arizona. Arrangements by Bunker’s Garden Chapel.