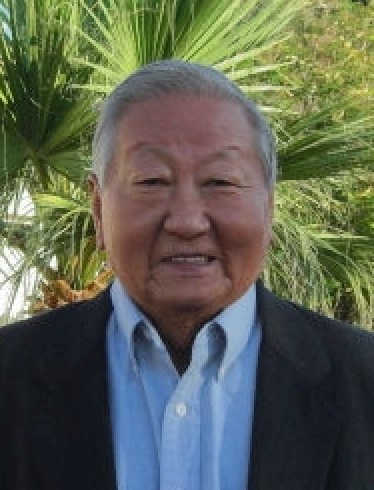 George Shan-Chang Hsieh, age 97, died peacefully in his sleep in Phoenix, AZ on July 2, 2022 after a brief illness. His daughter May Beth was at his bedside.

George was born on January 21, 1925 in the coastal town of Ningbo, China, but his family soon moved to the French section of Shanghai. He was the eldest of seven children of Xie Hong “John”, a businessman, and Ye Wei “Mary”, daughter of a Protestant minister. Young George was always on the go. He embraced everything from his father’s exotic imported foods to photography. He played tennis, basketball, swam, and even jockeyed racehorses, but he was probably best remembered for zipping around Shanghai on a motorcycle. The years were not all carefree; the Japanese invaded China and occupied Shanghai. The teenage George watched a Chinese pilot trying to evade a Japanese plane by dropping his payload; the bombs fell only blocks from his home. George could never forget the vivid image of corpses stacked on the curb.

George attended both high school and college at John’s University in Shanghai, a prestigious Christian Chinese-American university. Classes were taught in English, and graduates could transfer directly to graduate schools in the United States. George did this after graduating from St. John’s in 1948, seizing an opportunity extended by the Baptist church to study for a master’s degree in Political Science at Baylor University in Waco, TX. George’s beautiful fiancée Rose Wang from Shanghai also made this journey. They both attended Baylor and married in 1950. Given the recent Communist takeover in China, the young couple decided to remain in the United States.

Even as a full-time student, George worked at a restaurant at night. He worked his way up from busboy to full-time manager. With his convivial nature, George gravitated to jobs in the hospitality industry. In 1957, he launched into business with his own restaurant, “George’s Drive-In” on La Salle Avenue in Waco. For over a decade the drive-in was a favorite hang out for nearby Baylor University students and athletes. He also became a part owner of the Cathay House restaurant. When the new Interstate 35 diverted traffic away from La Salle, George turned the Drive-In over to his sister Lucy Henson, and became manager of the Woodland West Country Club and later the Red Lion dinner club. In 1970, he was recruited and became the manager of the first Hilton Inn in Waco.

In the meantime, George had become a father. He was proud of his three daughters, crediting his wife Rose for their accomplishments. Family vacations were often to Dallas for Chinese groceries and fashion shopping or to Galveston where the family would rent a room with a kitchenette to cook the freshest seafood around. George and Rose also traveled to Las Vegas, New Orleans, and Europe. Back home, George loved hosting large dinner parties, including many for the Taiwanese Flying Tiger pilots training at the nearby James Connolly Air Force Base.

Life could be exciting and unpredictable in the Hsieh family. For a period, there would be a new car every two years. The Hsiehs were the first family on Hermanson Drive to get a color television, drawing neighbors who gathered to watch the NBC peacock spread its colorful feathers. George liked nothing better than to laugh, joke and tease, eat well, tell a good story, talk sports, and buy you a drink.

George’s early interest in photography evolved from having his own darkroom to delighting in the instant gratification of the Polaroid camera. The family’s annual Christmas photograph became expected by relatives and friends around the world. George took up golf which he continued to play for decades. He also obtained his private pilot’s license, the source of many adventures. Once, he flew the whole family to Temple, TX for an authentic Chinese meal. George, his wife, and three daughters – all dressed up in their 1960’s Sunday best – then hitch-hiked from the landing strip to the restaurant! Another time his plane ran out of gas, forcing an emergency landing in a farmer’s field. His ultimate piloting story was when he lost radio contact, requiring the entire Orlando International airport to briefly shut down to bring him in safely.

In 1972, George left Texas to begin a new chapter of his life. After a few years in Orlando, FL, George had again worked his way up from nothing to being a successful restaurateur, eventually opening several successful restaurants. George’s greatest legacy was reuniting his family of origin. In 1979 with George’s sponsorship, his father, John Xie, became the first person to immigrate from the People’s Republic of China into the State of Florida. George’s mother, and eventually three of his brothers and extended family members followed. With patriarch George’s support, they started successful businesses and built new lives here. Family gatherings in Orlando often involved three generations of the Hsieh/Xie clan sharing meals and mahjong. George also married two more times, divorcing after 14 and 13 years respectively, but he remained lifelong friends with his second wife Cleo of Orlando, FL.

“Three lives and three wives!” was how George liked to describe his time in China, Texas, and Florida. In reality, he had more like nine lives, as he survived multiple challenges, reinventions, and life-threatening health conditions over the decades.

George began a final chapter at age 85 when, separated from his third wife Liz, he moved from Florida to Phoenix, AZ to be near his eldest daughter May Beth. He blended in with her life and discovered the senior center and became a regular at the local casino’s blackjack table. George made new friends, but still kept in touch with old friends and family by phone. He made grand trips to Hong Kong, China, Macau, Las Vegas, and Orlando, but mostly he enjoyed being “comfortable” at home. After the Covid pandemic, George entertained himself by watching sports and old movies on television. He saw May Beth and her dogs every day, and did chair exercises with her daily until the day he died. This “fourth life” in Phoenix was simple and sweet. Asked the secret to his longevity, George would say, “I don’t worry about anything!”

In his younger days, George lived life large. He was a risk taker, could be generous to a fault, and didn’t sweat the small stuff. He readily admitted to making mistakes in life, but he had no regrets. “Easy come, easy go!” was his mantra. He never complained and never lost his signature laugh. In the end, George died exactly the way he wanted: peacefully and in his sleep.

George was preceded in death by his brother, John Hsieh of Houston, TX, and sister, Lucy Henson of Robinson, TX. His first wife, Rose Pu of Houston, TX passed away one month after his death.

The family thanks Dr. Philip Ku and his caring staff as well as the loving caregivers at Ahwatukee Comfort Care where George lived his final months. Memorial contributions may be made to the charity of your choice.

The family encourages you to add your memories, photographs, and more in memory of George at this website: https://everloved.com/life-of/george-hsieh