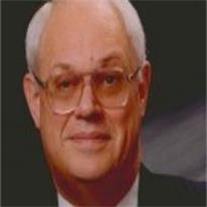 George Bruce Kiene peacefully passed away October 29, 2013 surrounded by his family. He was born July 11, 1933 to Pauline Bruce and Theodore John Kiene in Amarillo, TX. After graduating from Ajo HS in Arizona, he began attending ASU, but soon thereafter enlisted in the US Navy where he served during the Korean Conflict. It was there he joined the Church of Jesus Christ of Latter-day Saints and began a lifetime of faithful service. Re-stationed to San Diego, he met and married his sweetheart for over 56 years, Karen Andersen. George put himself through college and graduated from ASU in 1964 in the field of mathematics. He served a mission for his Church in 2007 and leaves a legacy of 6 children, 27 grandchildren and 10 great grandchildren. George loved to laugh and was a captivating story teller. He was a trusted confidant who inspired and coached. Most of all, he will be remembered for his genuine love for people – with George you always felt special. George is survived by his wife, Karen, his children Bruce, Mark, Kevin, Leslie (Horne), Janeen (Wright), Nola (Porter) and his best friend and brother Ted. Services will be held Saturday, November 9, at 10am in the LDS chapel, 745 N. Val Vista, Mesa, Az. A viewing will be held Friday, November 8, at the Bunker Mortuary Chapel, 3529 E University Drive from 6-8pm.