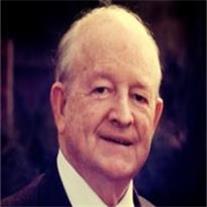 George F Prince, 82, passed away peacefully at home on December 23, 2010 with his beloved wife and children at his side. He was born in St. George, Utah on June 23, 1928 to William H. and Lida Cox Prince, where he spent his formative years. At age 12 his family relocated to Salt Lake City, Utah. Upon graduation from South High School he joined the Marine Corps. He married the love of his life, LaRue Morgan, on October 25, 1946 in the Salt Lake Temple. Nothing in life was more important to him nor brought greater joy than his eternal companion, family and posterity. George was truly an amazing man who accomplished many things in life. After his release from military service, he was diligent in his vocational studies, eventually becoming a Master Electrician. He felt compelled to expand his knowledge in the field of electrical engineering, striving to keep abreast of new developments in this ever-changing field. He worked for many years with his father and brothers at Prince Block Company in Salt Lake City. Later in his career he moved his family to Arizona and worked for Union Rock and Materials, Inc., a Peter Kiewit company, until his retirement in 1985. After his retirement he co-founded Prince Electric with his oldest son Michael. George loved the Savior and spent his life in service to others in various callings in the Church of Jesus Christ of Latter-day Saints. He was an avid scouter, achieving the rank of Eagle Scout and received the distinguished Silver Beaver Award. He was a Bishop, a member of the High Council and served two missions with his beautiful wife. He was a temple worker in the Mesa Arizona Temple for many years. George is survived by LaRue, his wife of 64 years, eight children and their spouses: Kay Lynn & Brian Hardy, Michael & Doris Prince, Tricia & Neil Hardy, Janene & Ralph Pew, Lida & Ronald Willis, Christine & Boyd Shill, Eugene & Kathryn Prince and Robert & Laura Prince. He is also survived by siblings Ronald (&Jerry) Prince and Marlene (& Hugh Pearce). His infant son, William Prince and great grandson Copeland Johnson preceded him in death. His brothers, Douglas (& Beth), Wayne (&Lois) and Jack (&Yvonne), preceded George in death although their spouses are still living. He has 53 Grandchildren and 97 great grandchildren. The viewing is Wednesday, December 29, 2010 from 6– 8 PM at Bunker’s Garden Chapel, 33 North Centennial Way, Mesa, AZ 85201. There will also be a viewing one hour prior to the service. Funeral services are Thursday, December 30, 2010 at 12 PM at the LDS Church Lazona Bldg., 1345 East University Drive, Mesa AZ 85201. Burial will follow at the City of Mesa Cemetery. The family wishes to express appreciation to Southwest Kidney and Sunrise Health & Hospice for their thoughtful, compassionate, and professional care.