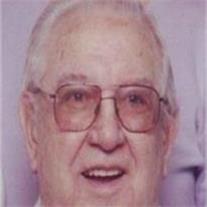 Send Photo of George B. Myler

George Blaine Myler passed away peacefully March 11, 2013 at the VA Hospital in Phoenix AZ, surrounded by his family. He was born to George Joseph and Rachel Bethea (Buttars) Myler in Clarkston, UT in 1924. George served his country in the Navy from 1944 to 1946. He was married to and sealed in the Logan LDS Temple, February 29, 1944 to Norma Bee Brown and they had 4 Children. George lived a very full and happy life for 66 years with Norma. They had many opportunities to travel throughout the world and the US with his work as a Superintendent of a large heavy construction firm. George was active in the LDS church holding many different positions of responsibility throughout the years. George lived in the Dreamland Villa area for over 30 years. He was a giving and caring man and a devoted husband, father and grandfather, loved by those who knew him. He was preceded in death by his wife Norma, daughter Sherene Russell, son William George Myler, and granddaughter Barbie Bosley. He is survived by daughters, Janet Bosley (Bruce) of Queen Creek AZ, Jeannie Engel (Ray) of PA, 20 grandchildren, 43 great-grandchildren and 2 great-great grandchildren. Visitation will be Friday, March 15, 2013 from 6-8 PM at Bunker’s Garden Chapel, 33 N. Centennial Way in Mesa. Funeral services are Saturday, March 16, 2013 at 11 AM, preceded by a visitation at 10 AM at the LDS Vineyard Ward, 1054 W. 2nd Street, Mesa AZ. Interment at the City of Mesa Cemetery.