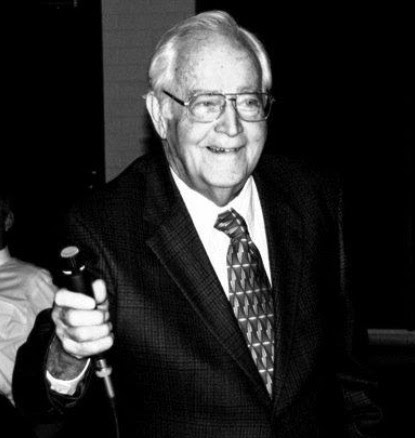 George was a veteran of World War II, serving in the US Army in the European theater.  He landed on Utah Beach, Day Six and traveled through Germany, liberating camps at the close of the war.

George graduated from ASU and taught chemistry and biology at Mesa High School and Phoenix Union before beginning a career as a chemical engineer.  Ultimately he owned his own water treatment business where he continued to innovate and work, up until last week.

George was well known for his musical talents which he generously shared.  He conducted choirs, directed musical productions, nurtured talent, anchored jazz bands from the piano and played the most peaceful prelude music on the organ for church services.  He was a gifted writer and speaker and had an amazing memory.

George was a faithful member of the Church of Jesus Christ of Latter Day Saints where he willingly served wherever he was needed.  His understanding, appreciation and application of gospel doctrine and principles were shared freely. He was generous with his time and means, supporting missionaries and others.  He maintained a beautiful home and yard and hosted memorable gatherings.

George was a man who never retired, but continued to face the challenges of life.  His example of endurance and perseverance will continue to inspire his numerous posterity. “I have fought a good fight, I have finished my course, I have kept the faith.”

Internment will be at the Mesa Cemetery.