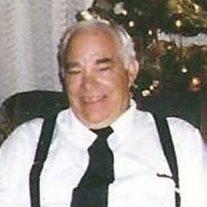 Franklin J McMillan (aka Frank, Papa, Big Papa, Dad, Old Man, Big Cheese, and probably more than a few expletives), left this earth in the early morning on 5 April 2014. He fought a long, tough battle against pulmonary fibrosis. We would like to say he won this battle (and so we will) because he surprised us, infuriated us, impressed us, and kept us guessing every single day of his 5 month tour of East Valley hospitals. He gave us more twists and turns than an E ticket ride at Disneyland (for the young’uns, those were the best, scariest, most fun rides). His final gift was his rally the day before his passing. He was alert, smiling, and laughing at his daughter and caregivers, followed by cantankerous disapproval of all of the poking and prodding. No matter what else is said about Frank McMillan, he did things his way, right to the end. It is our sincere belief that he tired of the whole hospital process and decided it just wasn’t for him. That’s it. Over and out.

Frank was born on 22 July 1939, and was a Leo. He was a self-avowed expert in all things politics, religion, social welfare, natural history, and astrophysics. He had an opinion about everything, and was not afraid to share it. His turn-ons included verbal sparring, rocks, and casinos. His turn-offs were mean people, Sheriff Joe Arpaio, and political party affiliations (or, as he would say, Repugnants and Dumbcrats). He loved to watch “The Price is Right”, and continued to enjoy it even when hosted by Drew Carey. He was also a big fan of “The Big Bang Theory” (perhaps because the teacher in him enjoyed seeing nerds win?). Although Frank preferred dogs, he had no real objection to cats. He was the ultimate connoisseur of mayonnaise. In fact, he might have been the world’s foremost expert on the substance, and knew at least 10,000 ways it could be used in everyday life. (Who knew mayonnaise could be spread on donuts?) He never bought the cheap, store brand mayo. He invested quite regularly in the large Best Foods jar that can be purchased at Costco. Frank prayed for world peace and an end to global warming.

Papa was the oldest of 6 children born to Gordon and Ida McMillan. He took his oldest sibling role very seriously, and continued to school his brothers and sisters on every topic all throughout their lives. He took a hands-on approach to their education. Legend has it, he taught his brother, Butch, about electricity by hooking him up to a car battery to see what would happen. Like all children born in this era, Frank woke at 4 am every day to cut firewood, hunt “edible” critters and clean the house from top to bottom. He then walked, barefoot, 6 miles in the snow (both ways!) to a 1-room schoolhouse, where 25 children had to share one pencil and there was no such thing as recess. (At least that is how he told the story to his daughters.)

After graduating from Rudyard High School in 1957, Frank served a brief stint in the Navy (less than 30 days) and was honorably discharged. Then he got uppity and went to college!! He attended Western Michigan University in Kalamazoo Michigan, and received a Bachelor of Science degree. Exposure to the Big City seemed to broaden his world view. He converted to Catholicism and, legend has it, he considered joining the seminary to become a priest. Evidently, that priest thing didn’t work out, because, shortly after graduation, he found himself married, with children, and a paying job as a teacher.

(Big Daddy would probably like us to pause here to tell you he had many, many jobs over the years. Teaching was the joy of Frank’s life, but he did take a few hiatuses from the profession. He started working around age 3, when he began the education of his younger siblings. He worked in the woods with his father, cutting lumber. He farmed. He cleaned. He built roads in Kentucky. He joined the Navy. He invented things. He was an amateur horticulturist, and was known for his expert skills in yard maintenance supervision and animal by-product removal. Frank considered himself a jack-of-all-trades and expert in all. No matter the job, the main thing he would want you to know is that he worked his whole life and found joy in everything he did. He definitely passed this gift to his daughters.)

The Big Cheese was the worst driver in the entire world (really, an actual vote was taken), so any car ride with him was an adventure. Frank very loosely interpreted “traffic laws” (merely guidelines, and did not apply to him). He believed it was safer to drive in the middle of 2 lanes (not always going in the same direction). It was more efficient to drive with left foot on the brake, right foot on the accelerator, cigarette in right hand, left hand hanging out of the window. He always ran the heat in the car – in Arizona, in the summer – because that would keep the car from overheating. Parking blocks were like speed bumps (and you don’t really have to slow down for them, do you?). The car flyswatter extended his reach just enough to enforce his will on anyone in the back seat without having to turn around for more than 10 seconds. (Kids and flies could be swatted in quick succession. In fact, the swatting of kids cleaned the fly from the swatter.) Unfortunately, the grand kids and great-grand kids never got to experience a car ride with Papa, as their parents banned him from operating a motor vehicle in their presence.

After a few short years teaching post-college, Frank took a job at Motorola and moved to Arizona. He worked in the semiconductor industry for the remainder of his professional career (although he still never missed a moment to teach anybody, anything, anywhere, anytime). His work took him from Arizona to California, Washington, and then back to Arizona, where he retired in 2004. Vacations were spent traveling in a van, with wife, kids and dogs, and staying in the best KOA campgrounds between Arizona and Michigan. (Some even had pools!) He always took the scenic route. Retirement years were spent in casinos, sending letters to his elected officials, pontificating about politics and religion, and – his favorite – spending time with his daughters, grandchildren, and great grandchildren. During the summer, he would return to Michigan, to the home where he grew up and where his parents still resided, to enjoy the peace and quiet, and fight the freakishly large and numerous mosquitoes.

Frank leaves behind a heartbroken family including his 5 brothers and sisters – Gordon “Butch” – this is his nickname, not his partner (Lonnie), Sandy (Abe Perales), Sherry (Butch Sherman), Leonard (Judy), and Kim (Carl Hatch); his 4 daughters – Laura (Bob Allen), Lisa (Shawn Barinka), Karen (Randy Hull), and Sarah; his grandchildren – Chris, Amber, Nicole, Aidan, Emily, Bill, Joshua, Jacob; and his great-grandchildren – Colton and Kinsley. He had many grandchildren of his heart, and was known as Papa to all, especially Juan, Ashley, Aubrey, Justine, David, and Michelle. He also enjoyed 4 step children (Colleen, Chris, Rick, and Brandon) and Colleen’s children aka his other grandchildren (Hannah, Rebekah, Jake, Grace, Luke, Zack, and Jack). Frank was the best father, grandfather, great-grandfather, brother, uncle, son, and friend a person could have. He was loved unconditionally and will be missed beyond measure.

Dad – You will be in our hearts forever.
Love your daughters,
Laura, Lisa, Karen, and Sarah 