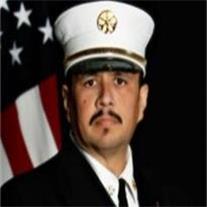 Frank Molina, 41- passed away Monday July 20th 2009 after a long and valiant battle with cancer. Frank was born in Tucson on October 18, 1967 to Francisco and Teresa Molina and moved to Mesa, AZ in 1990. He leaves behind his wife Therese Molina, stepdaughter Nancy Smith (Jasen), sons Javier and Lucas Molina, daughter Cienna Molina, sister Amanda Molina, brother David Molina, his father Francisco Molina, 25 brothers and sisters-in-law, 57 nieces and nephews, seven great nieces and nephews, and many aunts, uncles and cousins. In addition he leaves behind an amazing family of firefighters who have supported him through two bouts of cancer. He is preceded in death by his beloved mother Teresa Valles Molina, and has been gladly welcomed into her loving arms. Frank has spent more than twenty years in the fire service, more than half was as Battalion Chief /Fire Marshal for the Salt River Pima-Maricopa Indian Community. He was a paramedic and received a Bachelor’s degree in Fire Science Management from ASU. In addition he was a Certified Fire Inspector, Fire Instructor, Fire Investigator, and an AZ Certified Specialty Peace Officer. He also developed and implemented the Prevention Department for SRFD. These and many more accomplishments were achieved while battling cancer. Frank was awarded Member of the Year and the Distinguished Service Award from the Az IAAI, and Employee of the Year from the Salt River Pima-Maricopa Indian Community. Frank was a member of the International Association of Arson Investigators, the National Native American Fire Chiefs Association, the Arizona Fire Marshal’s Association, and many others. Frank worked every day to ensure that the Salt River community was a safe place to live. He had a great love for the community and a deep respect for its members and their culture. Visitation will be Monday July 27th from 6-8pm at St. Timothy’s Catholic Church, 1730 W. Guadalupe Rd Mesa, AZ 85202. Funeral mass will be Tuesday July 28th at 10:30am also at St. Timothy’s Catholic Church. Graveside services will follow. Donations may be made to Frank J. Molina “Fight for Life