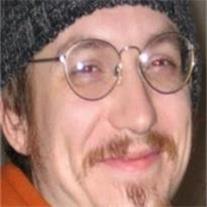 Frank Kaminski III, 33, passed away on March 15, 2013. Born on October 5, 1979 to Mary Carol Kaminski and the late Frank Kaminski II in Rochester, NY, Frank was married to Candee Kaminski in Mesa, AZ in 2008. Frank was an exceptional man, driven by intellectual curiosity and great kindness. He attended Churchville-Chili Senior High in Churchville, NY and graduated from Arizona State University in 2009 where he studied Economics, Supply Chain Management, International Business, and Religious Studies. Through the course of his life, he was an inventor, a philosopher, a calculus and physics tutor, a used car salesman, a liquor store liaison, a big rig truck driver, and a brilliant supply chain analyst. But the title he was most proud of was father. He is survived by his three children Lorenzo Chavez, Iris Eldorn Kaminski and Juniper Ann Kaminski; as well as his wife Candee; his mother Mary Carol; and his sister Marya. He was preceded in death by his father and his brother Adam. Frank’s family was at the center of his life. Donations to benefit Frank’s children can be made to the Kaminski Kids Memorial Fund at any Wells Fargo or on Paypal to kaminskikidsfund@gmail.com. Funeral services will be held at Bunker’s Garden Chapel, 33 N. Centennial Way, Mesa on Thursday March 21st from 6-8pm.