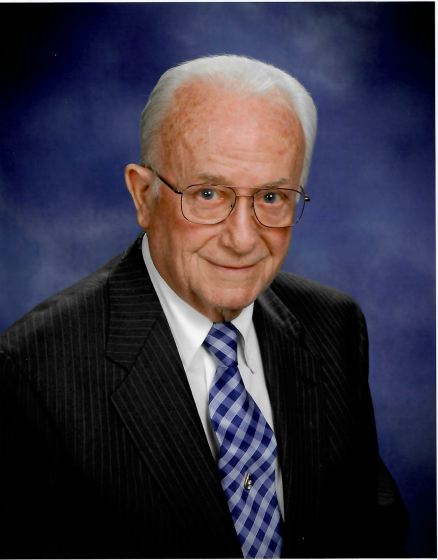 Frank Everett Jammes, 92, beloved dad, granddad and GGdad, passed away peacefully August 21, 2021 in Mesa, AZ  He is now reunited in heaven with his wife, Revenell (Nell) Marshall. Frank is also preceded in death by his parents, Benjamin Francis Jammes and Blanche Garwood, four brothers and four sisters. Surviving him are his loving daughters Marsha (Marti) Bookstein, Jayne Jammes, #1 grandson Bryan (Heather) Campbell and the apples of his eye, great-grandsons Kai and Jake Campbell, in addition to several nieces and nephews. Frank will be sorely missed.

Born in Sanford, FL, Frank began working and paying his own way at age ten. By age 12, he was working multiple factory and farming jobs after school – and also winning at pool games! Frank moved to Jacksonville and soon found his calling in sales, distinguishing himself by receiving many high sales honors from every employer.

Frank earned his GED and married Revenell Marshall in 1948. The young family later moved to Gainesville, GA for more opportunities. After 14 unhappy months they moved to Cocoa Beach, FL, and he became a salesman catering to America’s exciting new space program’s urgent, launch-critical needs. In 1967, as the space industry waned, he accepted a challenge to move to Arizona, partner in a new industrial supplies firm, and show people in the mining industry what the word service meant; he never looked back. Arizona became home. Over the next five-plus decades, Frank and Nell ran several industrial supplies companies, including B&D Supply Co of Arizona, Valley Industrial Supply, Inc and Copper State Supply, Inc, now run by Jayne.

A dedicated Christian, he shared his faith through example. Wherever he lived, he joined and served in a local Southern Baptist Church. Frank learned to be a faithful steward as a young adult and led building programs for growing congregations over the decades in Cocoa Beach, FL and Gold Canyon, AZ.

Peel Funeral Home, 301 E. Evans Avenue, Bonifay, FL will support the family on Saturday, August 28. Visitation will be at the Funeral Home at 9:30AM, with services at 10:30AM. Committal service will follow at East Pittman Baptist Church Cemetery.

In lieu of flowers, donations may be made in Frank’s memory to the Heart of Mesa Church, above, or East Pittman Baptist Church, Highway 179, Bonifay, FL, 32425.