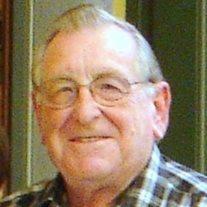 Our beloved husband, father, grandfather and great-grandfather Frank Dallas Floyd, age 86, passed away on February 22, 2014 in Mesa, AZ. He was born April 11, 1927 in the riverside town of Boonville, Missouri son of Percy M. and Mabel (Mellor) Floyd. He attended schools in Boonville and served in the Coast Guard at age 15, and in WWII as a Naval Air Force aerial gunner. Upon conclusion of his service in the US Navy he enrolled and graduated from the University of Missouri, Columbia, was a proud Kappa Alpha fraternity man, graduated in 1950 and was commissioned a 2nd Lieutenant in the Air Force. He married Marilyn Marcella Miller of Indianapolis, Indiana on September 14, 1952. He worked in sales management for most of his career, initially for Proctor and Gamble for 15 years in test markets, new product introduction and advertising in Philadelphia, Rochester and New York City. He moved his family to Idaho to work for Rogers Brothers Potato Company in 1965 and served as the administrator of the Idaho Potato Commission from 1971-1973. He subsequently worked for Albertsons as Director of quality control and product development. In 1976 he changed careers and for the next 20 years was a District Manager and stock broker for AXA/Equitable in Boise.
Frank was blessed with three children. He was an Eagle Scout, a great father who served in BSA District leadership positions, and was an example of consistent volunteering to serve in his church. Dad had faith in the Savior’s atonement and earlier in life attended Protestant churches. He was subsequently baptized and was a faithful member of the Church of Jesus Christ of Latter day Saints — his scriptures and Priesthood manual are heavily marked with his notes, underscoring his faith in our Heavenly Father.
Dad married Judith Ellis Nielson in 2006, and has enjoyed their homes in Mesa/Leisure World, Salt Lake City and Boise. Judith and Frank in recent years have loved to travel, dance, and be active in the Leisure World community.
He was preceded in death by his first wife, Marilyn, in 2003. He is survived by his loving 2nd wife, Judith, as well as Frank’s three children: Patrick M. (LaVonne) of Salt Lake City, UT; Gregory S. (Suzanne) of Boise, ID; and Carol Ann (Dale) Hooper of Boise, ID. At the time of his passing he was the proud grandfather of 11 grandchildren and 17 great-grandchildren. He is survived by his brothers: Harold Dene Floyd of Great Falls, MT and Percy Miller Floyd of Sterling, VA.
A viewing at Bunker University Chapel Mortuary in Mesa will be held on Friday, February 28th from 6:30 p.m. to 8:00 p.m. and at the LDS Century Gardens Mesa Ward, 633 S. Higley, on Saturday, March 1st at 10:00 a.m. The funeral service will also be held at the LDS Century Gardens Ward chapel at 11:00 a.m. on Saturday, March 1st.
Burial will be at the Morris Hill Cemetery in Boise, ID.