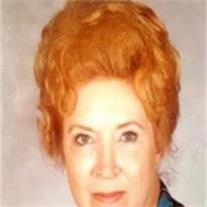 Britten, Flora Mae. Our mother Flora Britten, 87, passed away at the Hospice of the Valley on April 2, 2012. Her family was with her to see her on her journey to be with her late husband Geoff. She is survived by her three children Alan (Phyllis), Michael (Kim), and Patty Rollins (Larry), as well as seven grandchildren and one great grandchild. She is also survived by her brothers Jim Ferrin (Violet) and Levin Ferrin (Marsha) and sister Janice Jenkins. Flora was born in 1924 in Pima Arizona to Ether and Julia Ferrin. She is preceded in death by brothers Paul and Mac, and her sister Leila Branch. Flora was ever the romantic. She loved music, opera, sculpture, paintings, and a good story. True to her name, her greatest pleasure was to nurture flowers — especially roses. She marveled at the color, shape, and perfume of a single rose. Flora and Geoff met in 1944 while Geoff was in pilot training for the Royal Air Force at Falcon Field. They corresponded during World War II until they married in 1946 in Northhampton, England. Flora’s first child, Alan, was born in 1947. In 1952, Flora, Geoff, and Alan moved to Illinois. There, Flora gave birth to Michael and Patty. The family later moved to upstate New York. After Geoff’s death in 1966, Flora moved her family to Mesa. With inner strength and resolve, she single-handedly raised her family. She learned to drive, sent all three children through college, and earned a degree in education. Flora was a beloved third grade teacher at Hawthorne Elementary School. She instilled in her students the qualities of passion, curiosity, humor, playfulness, and high values. She touched hundreds of children, many of whom owe their successes to her teaching. She was active in the LDS Church throughout her life and served in many positions, including music director for the Relief Society. Her caring, gentle, and eternally youthful spirit will be missed by all that have had the privilege of knowing her. Funeral services will be held on Saturday April 7 at 10:00 am at the Church of Jesus Christ of Latter-day Saints Elmwood Ward at 925 N. Harris Drive, Mesa. She will be interred at the City of Mesa Cemetery following the service. Viewings will be held between 6-8 PM Friday evening at Bunker’s Garden Chapel, 33 N. Centennial Way, Mesa (www. bunkerfuneral.com) and at 9 AM at the Elmwood Ward Relief Society room.