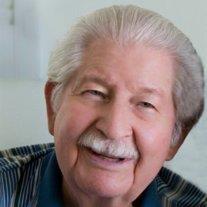 Evan Stephen Crandall, a resident of Great Falls for 56 years, passed away on December 12th in Mesa, Arizona, from natural causes. He was 91 years old. Born 25 April 1922 in a log cabin in Tabiona, Utah, Evan was the son of Joseph Cook Crandall and Lucile Martha Wilcken Crandall, both products of Mormon pioneer families. Evan spent his youth in Tabiona and later in Tooele, UT, where he worked as a paperboy, house painter, and at the smelter. He enlisted in the Army in 1943 and served in the Quartermaster Corps in Europe supplying Patton’s army, and then transferred to the Pacific Theater until the war’s end. In 1949 Evan married Pearl Leone King (“Sue”), and they had 2 children: Steve Crandall (Sukie), of Basking Ridge, NJ, and Corinne Geertsen (Jeff) of Mesa. In 1951 Evan was called back into military service to work in the Medical Corps as a clinical psychologist at a disciplinary barracks in California. Evan earned a degree in Psychology at the University of Utah and worked as a clinical psychologist in Utah and North Dakota, before settling in Great Falls in 1957. There he helped to establish the Golden Triangle Community Mental Health Center, a 9-county mental health center that served over 22,000 clients during its first 10 years of operation. Crandall retired in 1984 after 27 years of service to state mental health causes. After retirement he served as a representative to the Montana state legislature for AARP, devoting his efforts to preventing elderly fraud. As a boy, Evan enjoyed playing tennis and working his paper route with his dog Mutt. Later, he enjoyed long drives, vacations in the mountains, ice cream, and getting visits from his grandchildren. When they camped out in his back yard he would sneak out and pretend to be a bear. Evan is survived by his wife and children, and by his sister Louise Tate of Tooele, UT. He is also survived by 2 grandchildren and 7 great-grandchildren, all living in Arizona. He was preceded in death by two brothers. Arrangements by Bunker’s Garden Chapel.