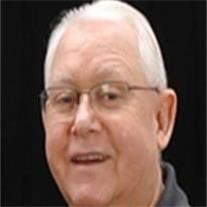 Erroll Joseph Dustin, age 67, died Tuesday, May 22, 2012 at his home in Chandler, AZ. He was born August 7, 1944 in Driggs, ID to Monroe Dustin Jr. and Vera Jean Dewey Dustin. He grew up in Cedron, ID just outside of Victor, ID. He attended grade school in Victor and high school in Driggs, graduating in 1963. He served an LDS mission to the North Central States from1963 to1965. He joined the National Guard and was part of the 116th Engineer Battalion which was activated in 1968 for service in Viet Nam from 1968 to1969. He attended college at Ricks College and BYU. In October 1969 he married Donna Joan Calvert. They have lived in Idaho, British Columbia, Alberta and the last 18 years in Arizona. He had a variety of professions including welder, exterminator, maintenance, truck driver and security guard. He could make or repair almost anything. He enjoyed his computer and encouraged many people to begin family history work. He will be deeply missed by his wife, Donna and their three children: Samuel (Jennifer) of Phoenix, AZ, Kathryn (Robert) Thompson of Maricopa, AZ and Verna (Sam) Riad of Chandler, AZ. His family includes 8 grandchildren and 1 great-grandson. He is survived by four sisters, EvaMae (Jerry) Pickett, LaRane (Don) Bone, Robyn (Kennie) Ostberg, and Sherri (Randy) Ivie all of Utah and three brothers, Dellas (Nancy); Wesley; and Todd (Jennifer) all of Idaho. He was preceded in death by his parents, a son, Joseph and foster brother Geoffrey Serawop. Funeral services will be held Wednesday, May 30, 2012 at 10 AM at the Chandler Arizona Stake Center, 1115 East Ray Road, Chandler AZ. Visitation will be held from 6 to 8 PM Tuesday evening at the church and from 9 to 9:45 AM prior to the funeral. Military burial will be at the National Memorial Cemetery of Arizona at 1PM. Arrangements are under the direction of Bunker’s Garden Chapel, 33 N. Centennial Way, Mesa AZ 85201, 480-696-6883. If desired in lieu of flowers donations may be made to Hospice of the Valley at www.hov.org or United Blood Services at www.unitedbloodservices.org.