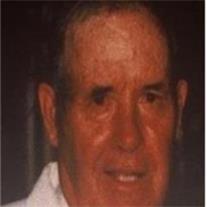 Ernest Harding McCabe passed away October 24, 2009, surrounded by his loving family. Ernest was born December 23, 1920 in Mulberry, Arkansas. He is preceded in death by his loving wife Clytia Mae. They were married on December 5, 1941 and were later sealed in the Arizona Temple for all time and eternity. Ernest missed his loving wife very much since her passing. They raised their family of nine children in Lakeside, Arizona.

Ernest enjoyed the outdoors especially camping, cutting firewood, and especially long walks with his wife. He was often present at his many grandchildren’s sporting events. He served in many different callings in his church. He had hands of steel and a soft heart. Ernest and Clytia served a mission Mississippi and they also served as Temple workers in the Arizona Temple. Ernest is survived by his children, Weslie, Robert, Gayle (Maxwell), Kenneth, Carolle (Nevill), Norman, Gordon, Scott and Paulette (Agne), 31 grandchildren and 65 great-grandchildren. Two of his grandchildren also preceded him in death Alan McCabe and Daniel Agne. There will be a viewing Tuesday, October 27th, at Bunker’s University Chapel, 3529 E. University Dr., Mesa from 6 to 8 pm. Services will be held at the Church of Jesus Christ of Latter-day Saints, Lakeside Ward Building, 1520 Church Lane in Lakeside, Arizona. There will be a viewing there from 10 – 11 A.M., Wednesday October 28 with services to immediately follow. Ernest will greatly be missed here on earth by his family and many close friends, but all are happy for his reuniting with his wife who he shared every possible moment with while they were here. The family would like to express their gratitude to Tina McCabe who cared for Ernest daily and also to Clifford Joy Maxwell for his handmade casket for their father. Ernest, you will be missed ‘til we all meet again.