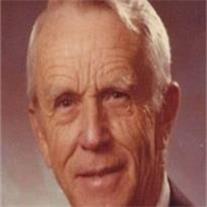 Taysom, Elvin David, 95, of Tempe Arizona passed away October 6, 2012 in Chandler, Arizona. Elvin was born August 5, 1917 in Rockland, ID to William Taysom and Ruth Hutchinson. He was the fifth of nine children. He married Myrtle Hall on September 5, 1939 in the Salt Lake Temple. During his younger years, he spent time going to school and working on the family farm. Upon graduating from high school in Rockland, Elvin pursued his graduate studies at the University of Idaho where he completed his BS degree in Animal Husbandry in 1940. At the same time, he finished his ROTC studies and was commissioned a 2nd Lieutenant in the Army. With WW II in full swing, he was first stationed at Ft. Robinson Nebraska, with the Calvary division of Company B, specifically assigned to prepare 6000 head of horses for war time duty. Within the year, the Calvary division was abandoned and he continued his service duty in the Quartermaster division. He was discharged from active duty in the Army in 1946 but remained active in the Army reserve and retired with the rank of Lieutenant Colonial in 1982. He completed his Master Degree from Utah State College in 1950 and a Doctorate Degree in Animal Science from Washington State College in 1953. He then took his first teaching position on the faculty of Arizona State College. During his teaching years, he was associated with Dr. M. E. Ensminger’s International Stockman’s School under the sponsorship of Agriservices Foundation and taught animal production in many schools in the United States, Russia, and Yemen. He retired from teaching in 1982 after 29 years of service to the students of Arizona State University. After retirement Elvin and Myrtle served as missionaries in San Diego, CA. They enjoyed their service to the people in the El Cajon Spanish Branch. Elvin spent many years of service in the Church of Jesus Christ of Latter-day Saints where he served nine years as Bishop of a young single adult ward at ASU and 18 years as an ordinance worker in the Mesa Arizona Temple. He is preceded in death by his parents, four siblings, Alice Hendrickson, Ina White, Orrin Taysom, Delsa Wardle and great-grandson Tanner Allen. He leaves behind his eternal companion of 73 years, Myrtle and 3 sons, David (Beverly) of Gilbert AZ, Jay (Elly) of Littleton CO and Rex (Megan) of Tempe AZ, 14 grand-children, 24 great-grand-children, and four siblings Robert Taysom of Mesa AZ, Lucy Stucki of Boise ID, Gayle Kress of Rockland ID, and Wayne Taysom of Tempe AZ. The family would like to thank Helen’s Assisted Living Center and Hospice of the Valley for their loving care. Visitation will be held Sunday, October 21, 2012 from 6-8 PM in the Tempe LDS Stake Center, 2707 S College Ave., Tempe with funeral services on Monday, October 22, 2012 at 10 AM, proceeded by a visitation from 8:30 to 9:30 AM, also at the Tempe LDS Stake Center. Elvin will be laid to rest in the Green Acres Cemetery in Scottsdale, AZ. In lieu of flowers the family request donations are made to the missionary fund of the LDS church. Arrangements by Bunker’s Garden Chapel.