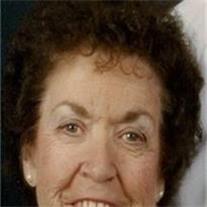 Cecil Jerry Dorsett, three brothers, Harold Biggs, Johnny Biggs (deceased), Donald Biggs, four daughters, seven grand-children and eighteen great grand-children will celebrate the life of Ella Jeanne Dorsett on January 3, 2012. Services will be held at 11 AM. Respects can be paid from 10 to 10:45 AM in the LDS Chapel, 2647 S. Signal Butte Rd, Mesa. Jeanne was born in Mesa, Arizona, to Fred Shill Biggs and Zula Irene Crismon and raised in Lehi. She married Jerry on 6 May 1953 and began a life filled with travel and adventure. As children came along, her focus changed to them and never shifted, only to be expanded to include grand-children and the greats. There were never enough for her. Then there was Wal-Mart and Disneyland or any other interesting store with anyone who would go. Jeanne loved life and lived free as long as she could. All of us, including Wal-Mart, will miss the sparkle in her eyes and the joy of her laughter. Arrangements by Bunker’s Garden Chapel.