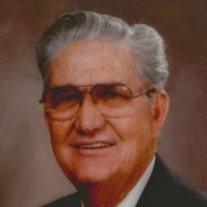 Elger Lorenzo Cutler, 92 passed away on July 28, 2014. Born on September 17, 1921 in Mesa, AZ to Lettie Maria Shumway and Lorenzo Earlies Cutler, he spent most of his youth in Hayden, AZ. Elger graduated from Hayden High School. He participated in all sports, however his first love was baseball. Elger worked in the Morenci Copper Mine prior to WWII. He served in the Army Air Corps during the war. He married Virginia Lou Martin and they were blessed with one daughter, Sherry Lynn. Elger was a heavy equipment operator and worked on jobs all over the state of AZ. He completed his career constructing the Palo Verde Nuclear Generating Station. He was very proud of his 50 years of service to the International Union of Operating Engineers Local 428. Elger served 12 years as a missionary for the LDS Church. He is survived by his daughter Sherry Tuft of Mesa; 5 grandchildren Virginia Jacobson of Mesa, Sara Singleton of Mesa, Heber Cutler Tuft of Monroe (LA), Shauna Evanson of Mesa, Rachel Allen of Gilbert; and 19 great-grandchildren call him “Papa.” Funeral services are Saturday, August 2, at 11:30 AM at the LDS Church (Porter Park Ward) 1852 N. Stapley Drive, Mesa, with visitation one hour prior to service at the church. Arrangements by Bunker’s Garden Chapel.