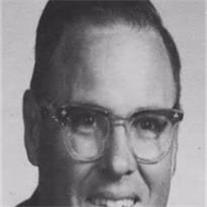 Edward (Ed) Charles John, of San Tan Valley, AZ, passed peacefully from this life to the next, on Saturday, March 16, 2013, due to complications of Alzheimer’s at the age of 78. Members of his loving family surrounded him in his final hours. He was born on June 1, 1934 in Aztec, NM, to Roy B. John and Viola F. Mulnix, and lived most of his youth in Nucla, CO. He married his eternal sweetheart, Eleanor Mary Barlow in the Salt Lake Temple on June 11, 1957. He is survived by his wife of 55 years, Eleanor (Elly), and their eight children: Lorin (Julie), Keith (Gloria), Diana Oaks (Adam), Coleen Long (Steven), David, Glenn Oliver (Laura), Patrick (Kristine), and Perry (Jamie), as well as 28 grandchildren and 7 great-grandchildren, his sister, Betty Fern Davis, brother Kyle (Cheryl), and brother Danny (Orvella). Preceded in death by his parents, brother David John, sister Dorothy Galyean; and grandson, Brian John. He graduated with a Master’s degree in Geology from Brigham Young University in 1964. He worked as a Geologist for the U.S. Geological Survey in Albuquerque, NM; Kennecott Copper Corp. at the Bingham Mine west of Salt Lake City, UT; and ASARCO at the Ray Mine North of Kearny, AZ. He was listed in Who’s Who of the West for his successes in that field. He was a faithful member of the in the LDS Church and worked in the scouting program in Utah and Arizona, earning the Silver Beaver award for his many years of leadership in the Boy Scouts. He served as Bishop of the Kearny AZ ward and as a missionary in the California Mission from ’55 – ’57, following with a second mission along with Eleanor in the California Fresno Mission. He was a true advocate for the young men of the church and community, and volunteered his time to coach youth baseball teams for many years. Funeral Services will be on Saturday, March 23 at 11:00 AM at the Cottonwood Heights Stake Center LDS Chapel, 6854 Whitmore Way. The viewing will begin at 9:00 AM the morning of the funeral. Donations in his memory may be made in lieu of flowers, to the Boy Scouts of America or the LDS Church Humanitarian fund.