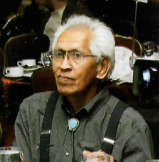 Edward “Floyd” Johnson went home to rest in the arms of our Lord Jesus Christ, February 2, 2022 in Phoenix, Arizona.

He was born March 29, 1944. He was the son of Otis Sr. and Hazel Hicks Johnson (both deceased) of the Gila River Indian Community, Sacaton, Arizona.

Floyd began his elementary education at Pima Central School in Sacaton, Arizona. He continued in the Tempe Elementary schools. He attended Phoenix College, and earned an associate’s degree in Medical Technology.

Floyd was employed by the Amsterdam Restaurant when he was a very young man. He completed his employment career at the Arizona State Hospital, after 24 years, then he retired.

He enjoyed volunteering for different organizations for the betterment of humanity. Floyd was a avid reader of Native American history, and was a very talented artist. He enjoyed listening to all types of music from symphony orchestra to Native American tribal music, to old time rock and roll.

He was a very kind and loving brother, uncle, mentor and friend to many. He will be missed by numerous nieces, nephews, cousins, and all those who dearly loved him.

Floyd’s wishes were to be cremated and his ashes be scattered at his childhood home, on the Gila River Indian Community.

Due to the Covid virus, a tribute to Floyd’s life will be at a later date.