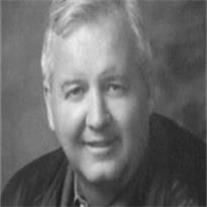 Edward J. Ball, Jr., passed away on Monday, February 22, 2010 at his home in Mesa, Arizona. Ed is survived by his father, Edward J. Ball; son, Edward J. Ball III; sisters, Peggy J. Jones, Azelene Allen and Patricia Gail Armstrong, three grand-daughters, Courtney, Cassidy and Chloe Ball, many nieces and nephews, and his beloved border collie, Kadie. Ed was born in Phoenix, Arizona in 1948. He was a prominent commercial real estate developer in Ventura County, California for many years. Ed loved the outdoors and was an avid hunter and fisherman. He will be missed by his loving family and friends. A celebration of his life will be held on Monday, March 1, 2010, 6-8pm at Bunker’s University Chapel, 3529 East University Drive, Mesa, Arizona