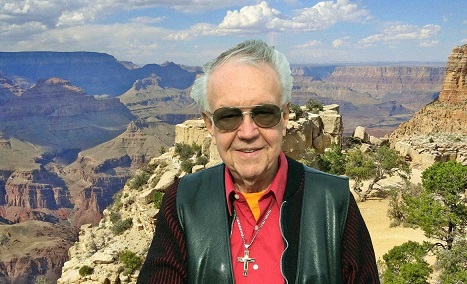 Edward Arthur Watson passed away on May 6, 2019 at his home in Mesa, Arizona.  Ed was born on July 29, 1940 in Chicago, Illinois to Arthur and Crystal Watson.  Although Ed never married, he lived a full and exciting life.

After graduating high school, Ed held several jobs before joining the Navy and then the Naval Reserves.  He attended Gustavus Adolphus College for two years and worked for Illinois Bell (AT&T) until his retirement.  After retiring, Ed moved to Scottsdale, Az where he lived for 27 years before moving to Mesa in 2018.

His passions were family, flying, friends, firearms, and the military.  He was very devoted to his mother for the remainder of her life.  He and his brother Richard not only had family in common, but also military service.  Together, they enjoyed spending time on military themed vacations.  He was a life-long member of the American Legion. Ed maintained contact with his nephews John and Philip and niece Julia in the Chicago area.  He maintained relationships with family in Oregon and made visits for special occasions. Ed spent many hours with his family members in Mesa and Phoenix and especially enjoyed the children, Haylee, Lillee and Emilee Jones.

Ed was an avid pilot and loved to fly!  He flew most of his life and over the last few years flew every holiday morning because, he said, “everyone else was celebrating the holiday and he was the only one at the airport”.  He was very proud of being able to maintain his pilot’s license.

Ed had lots of acquaintances and friends.  Few people can say they have had a close relationship spanning 60+ years, but Ed did.  He and Chris Makris had such a friendship and Ed truly treasured it.

Ed enjoyed collecting and shooting firearms, was a member of local shooting clubs and a proud member of the NRA.  He took every opportunity to load a few firearms in his SUV and head for the firing range.

Ed was proceeded in death by his father and mother, Arthur and Crystal Fisher Watson, sister Marian Maher, and brother Richard Watson.  He is survived by Nephews John and Phillip Maher, Richard Watson Jr. and nieces Julia Watson Dombrowski and Christy Watson, as well as numerous cousins spread throughout the country.

Ed was a unique and caring individual who will be missed by his family and friends.

Funeral arrangements have been made through Bunker’s Garden Chapel in Mesa, Arizona (www.bunkerfuneral.com).

Funeral service with military honors will be held at 9:00AM on Thursday, May 30, 2019 at National Memorial Cemetery of Arizona.