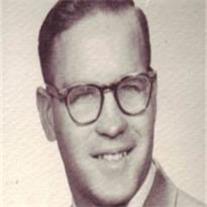 Edgar Neeley Bouchard, of Tempe, passed away April 18, 2012 at age 80. Born April 9, 1932 in Prescott AZ, he grew up in Tucson, graduated from Amphitheater High School and attended the University of Arizona. After service in the US Army Signal Corps, he spent his career as a broadcast engineer working at several radio and television stations in Arizona including KVOA, KOOL TV, KNAZ, and KUSK among others and was also an active member of the Arizona Broadcaster’s Association. He is survived by his wife, Janette, and children Marla, Brian, and Wayne. Services will be held Wednesday April 25 at 11:00 am at the Tempe ward meeting house of the Church of Jesus Christ of Latter-day Saints, located at 1221 W Howe St, Tempe, AZ. There will be a viewing one hour prior to services. Arrangements by Bunker’s Garden Chapel.