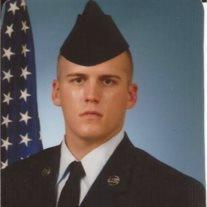 Dustin Howard Owens, born May 30, 1989, was called home Wednesday March 19, 2014 while serving his country in Osan Air Base, Republic of Korea. Dustin was a very happy go lucky man. He never met a stranger and was always willing to help anyone with anything. He loved to go camping, hunting and fishing in the White Mountains of Arizona. He served in the United States Air Force in the 355 Equipment Maintenance Squadron, specifically as an Ammo troop. He was stationed at Davis-Monthan Air Force Base from 2009-2014. Most of all, Dustin loved his family and made that very apparent to anyone he met. He is survived by his wife Brianna, children AmyLynn, Mavvrick, EllyMae and expected daughter TessieAnn, his mother Cheryl Skiles Owens, father Joseph Owens and sister Kalyne Owens. Visitation is Monday, March 31, 2014 from 6-8 PM at Bunker’s Garden Chapel, 33 N. Centennial Way, Mesa, AZ 85201. Funeral services are Tuesday April 1 at 11 AM, preceded by a visitation at 10 AM at The Church of Jesus Christ of Latter-day Saints, 2228 E Brown Rd Mesa, AZ 85213. Interment will follow at Mountain View Memorial Gardens, 7900 E Apache Trail Mesa, AZ. In lieu of flowers donations can be made to the Dustin Owens Memorial fund at any Wells Fargo Bank or via PayPal with the email address stelarammojunky@gmail.com.