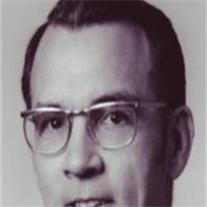 Durward Walter Black, 94, of Mesa, AZ passed away February 14, 2011. As a young man, he was a Tech Sergeant in the US Air Force at Williams Field. From 1947 to 1979, Durward worked for Alpha Beta Markets, retiring as Vice-President of Merchandising. In 1973, he was also the President of Western Association of Food Chains. He served as a Bishop for the LDS Church and served missions with his wife to Mexico Torreon, West Indies, and the Family History Library. He is survived by his wife, Eileen Guthrie Black; his children, Elizabeth (Steven) Fuller, Barbara (Jack) Fox, Duane (Linda) Black and Kenneth (Inga) Black; 16 grandchildren and 16 great-grandchildren. Funeral Services will be held at the LDS 34th Ward Building, 2152 E. Adobe, Mesa, AZ on Saturday, February 19, 2011 at 11:00 AM. Visitation will be from 10:00 AM to 10:45 AM. Arrangements entrusted to Bunker’s University Chapel.