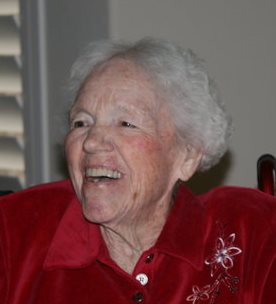 Dorothy Evelyn McRae Keller was born on January 19, 1920 in Mesa, Arizona, the daughter of Milton and Hattie Josephine Williams McRae. She passed away in Mesa on October 6, 2014. Dorothy spent her early life in Thatcher, Arizona being raised by her grandmother, Harriet Williams, as Dorothy’s mother died when Dorothy was 4 years old. She attended Gila Academy after high school graduation. She lived in California for a short time before joining the WACs during WWII. Her friend introduced her to Ralph and they corresponded for the duration of the war. They married on September 4, 1945 and moved into a small home in Phoenix. After 5 years of marriage and 3 children they moved to Ajo, Arizona. Their other 4 children were born there. After the birth of their last child they moved to San Diego, California and lived there until 1964 when they returned to Arizona. They spent many good years in Strawberry, Arizona before Ralph passed away in 1999. Dorothy moved to Mesa and spent the remainder of her life there. Dorothy’s main focus in life was her family and The Church of Jesus Christ of Latter-day Saints. She was proud to be a descendant of pioneers back to Nauvoo, Illinois.

Dorothy’s funeral is planned for Saturday, October 11 at 11:00 a.m. at The Church of Jesus Christ of Latter-day Saints, 2220 North Harris, Mesa. A viewing is planned one hour prior to the services at the meetinghouse.