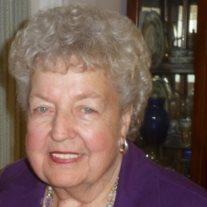 Donna Nelson Wright, daughter of David Sanders Nelson and Martha Elizabeth Fuller, was born April 23, 1930, in Phoenix, Arizona. Donna married Robert Wayne Wright in the Mesa Arizona Temple on June 5, 1952. She was preceded in death by her husband, her parents and her twin sisters, Noreen Nelson Taylor and Doreen Nelson Tenney. She is survived by her four children (Eva Kathryn Openshaw, Karen Elizabeth Decker, Robert David Wright, and Richard Wayne Wright) and also by her aunt Pearl Loftin. She also leaves behind 16 grandchildren and 20 great-grandchildren, all of whom love her and miss her very much.

Donna was a student at Brigham Young University, where she earned a Bachelor of Arts degree in music with a minor in English. She later attended Northern Arizona University, earning a Master of Arts degree in elementary education. She studied music and organ performance with J. J. Keeler, who taught other students that later became organists of the Mormon Tabernacle Choir. Donna also studied with Frank Asper, Tabernacle Organist (her last lesson with him was on the Tabernacle organ).

Donna taught elementary school, music, and piano lessons for many years. In 1974, she purchased a Mary Moppet’s franchise and eventually expanded her daycare business into two successful schools, which she operated in the Chandler area for many years.

Donna was an active member of The Church of Jesus Christ of Latter-day Saints, and served faithfully in the church for her entire life. She served as the ward organist beginning in her youth and continued in that calling until her passing. Indeed, Donna’s life is an example of love and service. After her retirement, Donna served as a full-time missionary in the Family History Center in Salt Lake City, Utah. Donna was very involved in temple and genealogical work in the church for many years. She served as an ordinance worker in the Mesa Arizona Temple, and also spent many happy years doing extraction and indexing work, preparing approximately 300,000 names for proxy work in the temple.