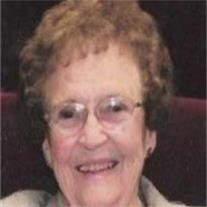 Donna Francom Packard, our sweet mother, grandmother and great-grandmother died September 2, 2012 in Gilbert, Arizona. She was one of six children (2 boys, 4 girls) born to Ernest Harding Francom and Prudence Hudson. She was born on the Francom Farm on the west mountain in Payson, Utah on January 14, 1920. Her mother died during the childbirth of the youngest sibling when Donna was just eight years of age.

Donna graduated from Payson High School in 1937. She worked on the farm alongside the other siblings and her father, who was well known for his generosity to the town folk after each watermelon season, opening up his fields for the ever-popular ‘Watermelon Busts’ for all to partake of and enjoy.

On December 7, 1938, Donna married Bliss R. Packard, and for several years they raised their young family on the Packard Farm in the Springville west fields before moving into Springville when Bliss became Postmaster in Springville. After retirement they were called to England as Directors of the London Temple Visitors Center from 1979-1981.

When Bliss and Donna returned from England, they decided to spend their winters in Mesa, Arizona to be near most of their children and grandchildren – and to enjoy the warmer climate.

Donna and Bliss loved the experiences and new friendships made during the nine years they served as volunteers two days a week in the Mesa Lutheran Hospital.

Donna and Bliss have six terrific children who have brought them great joy, love and happiness:

The family wishes to express sincere gratitude to all who have had interactions over the years – having positive influence on their sweet parents – stalwarts from another era.

Condolences may be sent to www.bunkercares.com. In lieu of flowers the family suggests donations to your favorite charity.