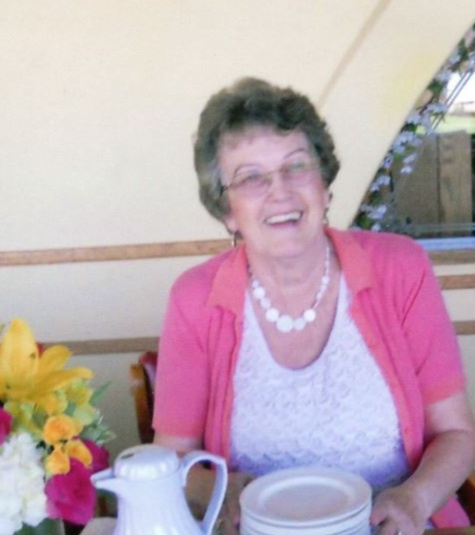 Her parents, Gayl Raymond and Eva Bishop Mongar, lived in Osceola, Iowa with Eldon and Phyllis who welcomed Donna Lou to the family.  She was later joined by Lonnie and Richard.  Their family of seven grew up in Osceola, Iowa for seventeen years.

She was very active in high school and extremely proud of being a member the National Honor Society.  She was active in girl’s basketball from fifth grade on. In high school she was a high scorer and free throw champion.

She attended Iowa Wesleyan College in Mt. Pleasant, Iowa on a basketball scholarship. Lou won a place on the college AAU woman’s basketball team which was ranked second in the nation.

Lou met her husband, Jim Greene in college. She was a member of Alpha Xi Delta sorority. Jim and Lou were married June 11, 1960. Lou taught fourth grade in Mt. Pleasant while Jim finished his degree.

Their first son was born in Mt. Pleasant and died 4 hours later. They named him Craig Arthur.

Jim and Lou both taught in Churdan, Iowa where Cindy was born.  They later moved to Grand Junction, Iowa where Barbie was born.  The family welcomed Debbie and John later to complete their family of six. The family lived in Grand Junction, Iowa for 29 years. They later relocated to Arizona where they started a sporting goods company called Greene’s Athletic Supply.  Lou ran the home-based office while Jim called on many different schools in Arizona.

Lou taught for 13 years in 4 different schools and 2 years as a teacher’s aide in a resource classroom.

Lou had many interests and hobbies.  She loved the Lord Jesus and spent 25 years in various bible studies.

A highlight in the family’s life was celebrating their 50th wedding anniversary in Palm Desert, California.  The family spent several days at a resort with their 4 children, spouses, and all 7 grandchildren.

Lou was preceded in death by her parents Gayl and Eva Mongar, two brothers, Eldon, and Lonnie Mongar, and brother in-law, Wayne Black, aunts, uncles, sister in laws, cousins, and their infant son.

She will be greatly missed by all who knew her.